By the end of the night, a Democratic politician will (likely) claim victory in New Hampshire, the small New England state home to less than 1.5 million Americans, which holds the first-in-nation primary. Although campaigns will quickly move on to the next batch of primary states tomorrow, it has been a wild year for New Hampshirites as masses of people, including the candidates themselves, headed to the Granite State to get ready for today.

"There's a joke that says 'how can I vote for someone for president if I've only met them two to three times?'" Taylor Caswell, commissioner of the Department of Business and Economic Affairs told Cheddar. "There's some truth to that."

Like most early voting states, a victory doesn't guarantee a long-term triumph. Just ask Bernie Sanders who cinched the New Hampshire primary in 2016 and lost the first-in-nation Iowa caucuses, by the smallest margin in the contest's history, only to lose the nomination.

However, winning the primary gives candidates a boost, and since no candidates dropped out of the race after Iowa for the first time since 2004, the Granite State may have a lasting effect.

Caswell's office is on Concord's Main Street, directly above Revelstoke Coffee which attracts a younger audience and seems to appeal to campaign staffers who put temporary roots down in preparation for the primary.

Those staffers, along with the candidates and journalists who pop into town in the run-up to voting, tend to take over the location — and order a lot of coffee.

"I always know there's a candidate down there [in the coffee shop] because it's really quiet," Caswell said. "It suddenly gets quiet down there and all of a sudden you'll hear a lot of applause and laughter."

Stoyle and co-owner Lyndsey Cole have welcomed between 12-15 candidates since one-time 2020 hopeful Sen. Kirsten Gillibrand hosted an event in February 2019. Some campaigns hold officially sanctioned events there, but other candidates just wander in off the street.

"They mostly go for the decaf," Stoyle told Cheddar. "I'd say the most common drink among [candidates] is a decaf Americano."

Revelstoke Coffee opened just over a year ago and was off and running just in time for the primary season. Candidates may clog up the shop for a bit of time, Stoyle said, but the campaigns tend to be "very conscious of the fact that it is a disruption in our normal day." He added that it's a "welcome disruption," except the one candidate, Stoyle would not name, who flaked. 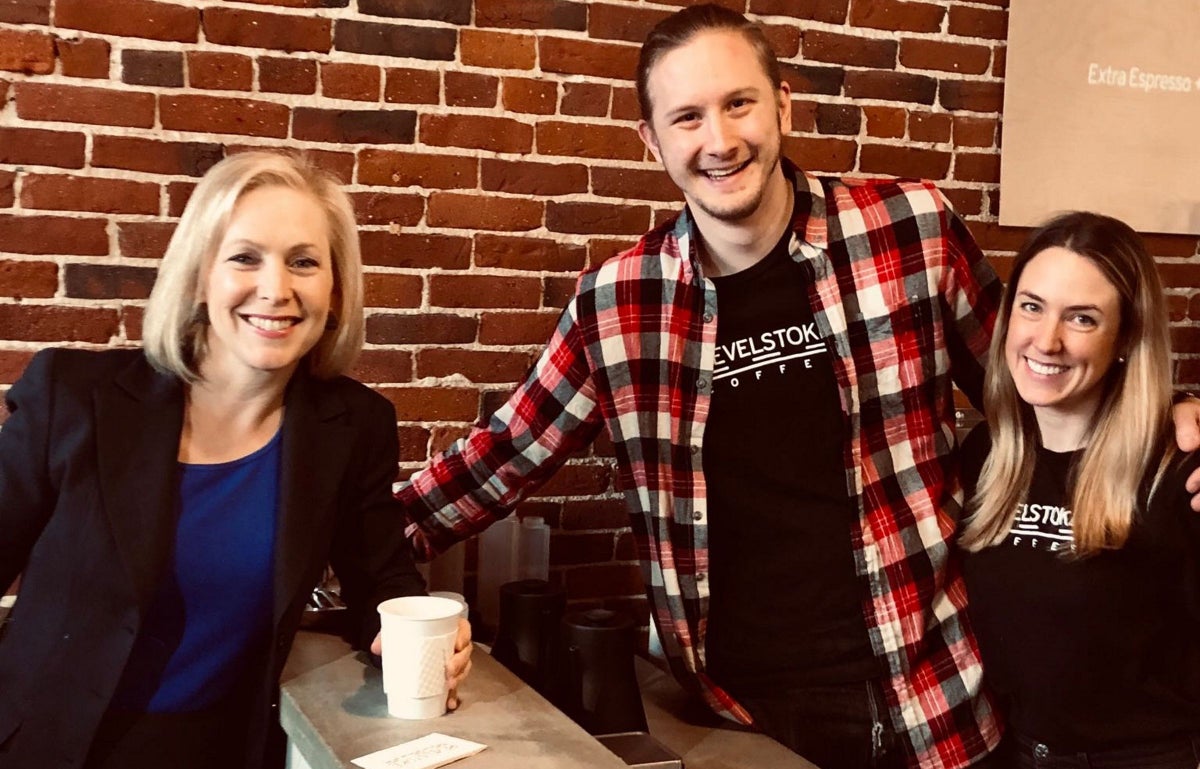 "Most people here welcome the ability to sort of spend time with a lot of these candidates," Caswell said.

"An easy way to narrow it down is to say 'We're only going to vote for someone who comes and visits us,'" he said.

More than 40 percent of state voters are registered independents and though only 24 delegates are up for grabs, victory can help candidates who may be struggling in the polls. Tonight's primary is expected to run more smoothly than last week's Iowa caucuses, largely because it's run by the state government instead of political volunteers and the state is using paper ballots, rather than the new app that had been used in Iowa.

"The role that New Hampshire plays is one that is always welcome to being reviewed and questioned by the people who make these decisions, but from my standpoint, we take the role pretty seriously and understand New Hampshire isn't as diverse as other states," Caswell said of the state's population which is 93 percent white. "There are a multitude of ways to address that, but here in New Hampshire you have to really campaign with people in their living rooms."

Stoyle said he and his friends have treated this year's primary as a chance to vote for the person they really believe in — and have met.

Politicians, staff, and media will clear out of the state's capital as soon as someone declares victory and, when that happens, "I think the thing we'll miss the most are the staffers," Stoyle said.

Though he doesn't call himself a "big, big political guy," when asked if he pays attention, he laughed. "Oh, of course, I'm from New Hampshire so I take it very seriously."

WATCH NEXT
That Time The U.S. Almost Built A Death Star

5:44
Bernie Sanders Victorious in New Hampshire
Vermont Senator Bernie Sanders, former South Bend Mayor Pete Buttigieg, and Minnesota Senator Amy Klobuchar took the top three spots in the New Hampshire Primary. Reporter Eugene Daniels with Politico joined us to break down the results and what they mean for the upcoming primaries.
Key Takeaways From Democratic Debate in New Hampshire
Three days before the critical New Hampshire Primary, seven Democratic presidential candidates debated, with many of them fighting to survive in the race to challenge President Donald Trump.
6:58
Candidates Turn Their Focus to Super Tuesday
With the results in from New Hampshire, Democratic candidates are now heading south to make their case ahead of Super Tuesday. Cate Martel, a reporter with The Hill, broke down how the candidates move forward from here.
close
We use cookies and similar technologies on this site to collect identifiers, such as IP address, and cookie and device IDs as described in our Privacy Policy.