Jan 4, 2021 03:25 pm
By Taylor Craig
Share with
2020 was undoubtedly a year of ups and downs, with the economy seeing sky-high records along with devastating lows. And for major tech players in the mergers and acquisitions market, this year's activity resembled a valley between two peaks.
Before COVID-19 hit, there was extensive consolidation throughout the tech industry already unfolding. February saw more deals valued at over $1 billion than any other month in 2020, led by Morgan Stanley with its $13 billion acquisition of online brokerage E-Trade.
But a pandemic-stricken spring and summer that rattled markets and sent valuations swinging unpredictably put M&A activity on the back burner. Then came September.
Of the 19 tech deals valued above $1 billion, more than half were announced in the last four months of 2020. And chipmakers Nvidia and Advanced Micro Devices made serious waves.
U.S.-based Nvidia ($NVDA) took home the “biggest deal of the year” honors with a $40 billion acquisition of British chip designer Arm, purchasing the company from Japan’s SoftBank.
Because Arm has some operations in China, rival chipmakers like Huawei are urging Beijing regulators to block the transaction. Both companies expect the massive deal to take a whopping 18 months to complete. Arm’s CEO Simon Segars recently said that he expects regulators to “take a good look” at his company’s deal with Nvidia.
Just a month later, rival semiconductor manufacturer Advanced Micro Devices ($AMD) announced it’s acquiring Xilinx ($XLNX), the world’s leading provider of adaptive computing solutions, for $35 billion to expand its portfolio and bring AMD’s total assets under management to $110 billion. 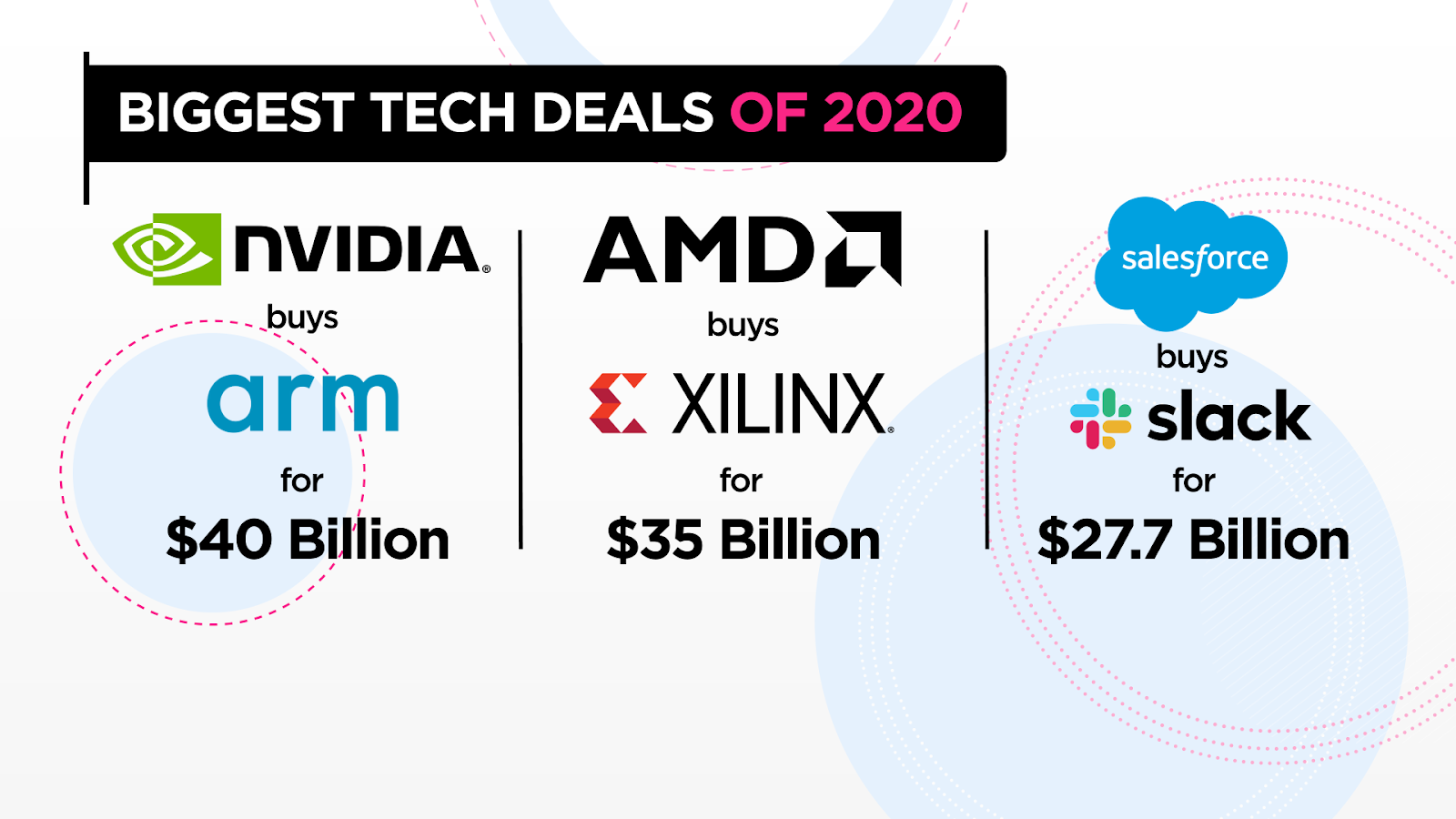 It’s no surprise that chipmakers went on a buying spree this year as more people locked indoors meant more video games being played, driving demand for state-of-the-art graphics cards. AMD’s chips are powering the new Xbox Series X/S and PlayStation 5 gaming consoles.
But Nvidia, which also completed a $6.9 billion deal to acquire Mellanox as a way to elevate customers’ computing power, isn’t the only company that scooped up multiple billion-dollar companies this year.
In February, Salesforce ($CRM) bought mobile software company Vlocity for $1.3 billion to expand its cloud computing business and capped off the year with the eye-catching deal to purchase Slack for $27.7 billion.
Cheddar anchor Kristen Scholer picked the third biggest acquisition of the year as her favorite deal to shake out on Wall Street. 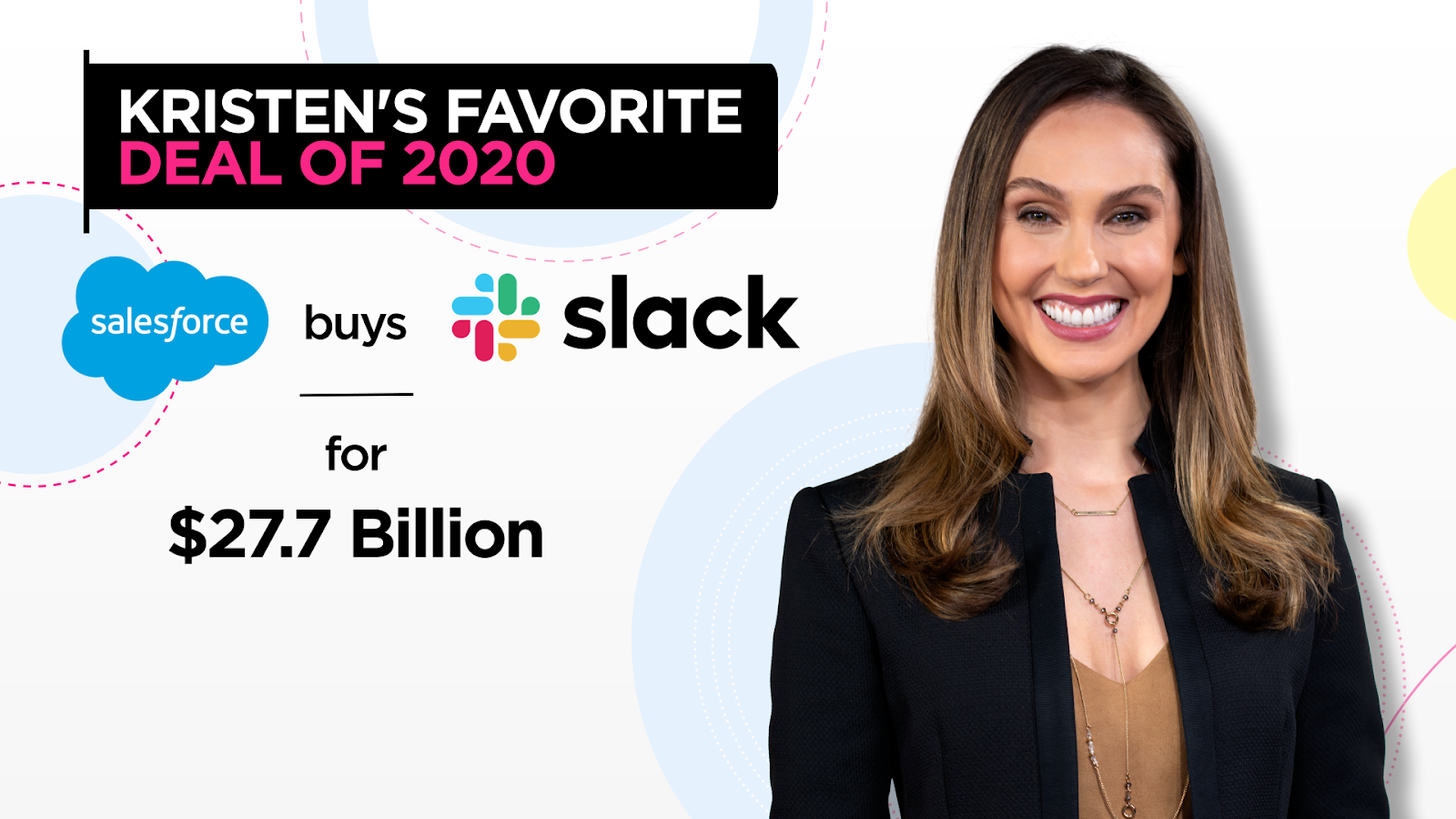 In a year of remote work, it's no surprise Salesforce saw potential in Slack. Its nearly $28 billion purchase of the workplace message app gives Salesforce a competitive hand against Microsoft's Teams platform, which also witnessed growth during the pandemic.

Slack rejected offers from Microsoft, Google, and Amazon since its founding in 2010. However, it approached Salesforce, a company on a highly-acquisitive streak of late, and will operate as its own unit at the firm, with founder Stewart Butterfield continuing to lead it.

2020 was also the year that Uber appeared to throw in the towel on self-driving technology, selling its autonomous driving unit Advanced Technologies Group to Aurora for $4 billion. It was Cheddar anchor Nora Ali’s favorite acquisition of the year. 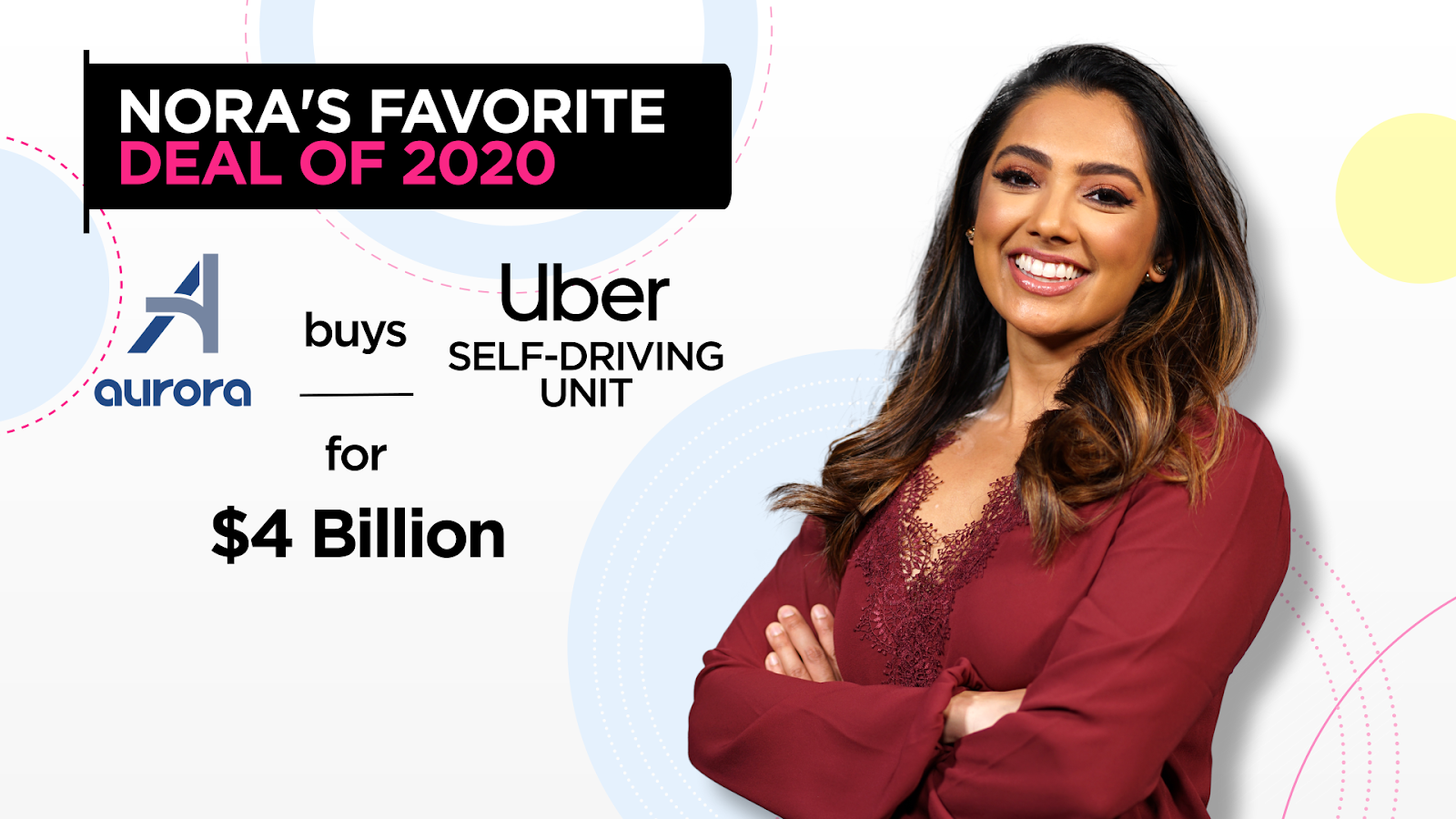 I think Aurora’s decision to buy Uber’s self-driving unit, Advanced Technologies Group, is one of the more interesting acquisitions announced this year because it could have a direct impact on when we see autonomous vehicles on the road. Aurora is backed by giants like Amazon and Hyundai, and by teaming up with Uber, we may see autonomous vehicles being used for deliveries and ride-sharing even sooner than expected. Under Uber, its self-driving business was costly and came with safety challenges; but through this deal, Uber can still retain an investment stake in the self-driving business and benefit from innovation in the space without taking on as much of the cost…making investors a little more optimistic about the company’s path to profitability.

While the pandemic proved disruptive to the M&A landscape, well-capitalized companies seized the opportunity to diversify their portfolios and grow their businesses.
Related
4:07
Supermarket Wars: Bargain Hunters Benefit Both Walmart and Aldi
From Using Apple Dev Tools to Troll Farms, Meta Reveals New Cyber Criminal Tactics
From Feral Girls to Coastal Grandmothers, Spotify Picks Out the Latest Summer Trends
WATCH NEXT
Monkeypox Vaccines & Texans Back Legalization: What You Need2Know
About UsJobsAdvertiseLicensingCheddarUContact UsTerms of ServicePrivacy Policy