Massive Explosion & Gas Drops Below $4: What You Need2Know

Get the Need2Know newsletter in your inbox every morning! Sign up here!
Here are the headlines you Need2Know for Thursday, August 11, 2022:

At least three people were killed in a massive explosion in Evansville, Indiana, Wednesday. Videos of the blast that damaged 39 homes, leaving 11 "uninhabitable," were making the rounds on social media, showing a giant plume of smoke and debris erupting in an otherwise quiet neighborhood near the borders with Illinois and Kentucky. No word yet on what caused the blast, but officials said an arson investigation is underway.

President Joe Biden signed the PACT Act, which will provide benefits and support to servicemembers suffering from long-term illnesses caused by burn pits. The pits were massive areas in Iraq and Afghanistan where the military disposed of everything from chemicals to human waste, leaving toxic dust in the air. Biden's son Beau died in 2015 from an aggressive form of brain cancer, which the president said may have been tied to the pits. 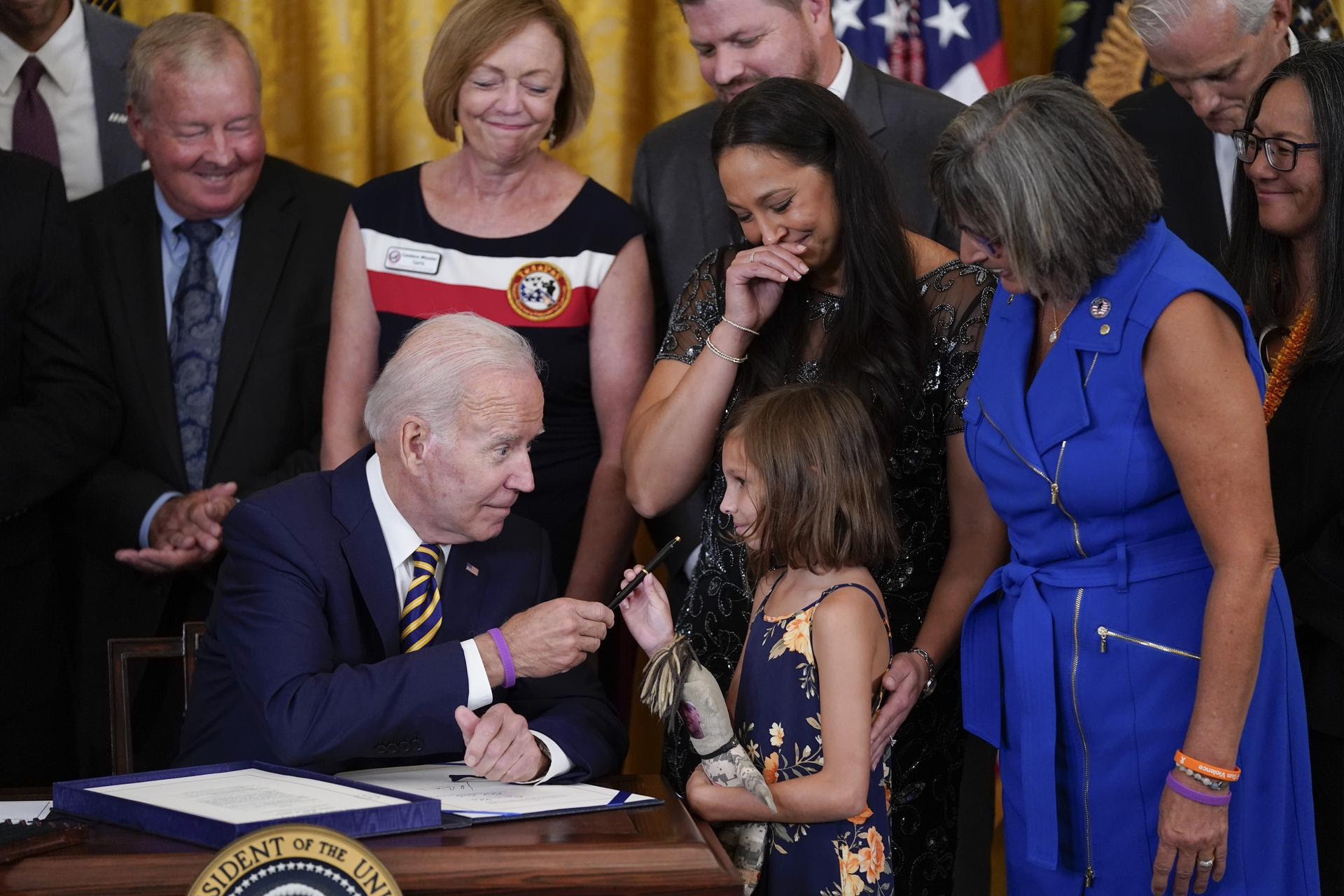 Biden gives the pen he used to sign the PACT Act to Brielle Robinson, daughter of SFC Heath Robinson, who died of cancer two years ago. [AP Photo/Evan Vucci]

After months of record-setting gains, inflation is finally starting to slow. The latest consumer price index showed zero percent inflation from June to July, in large part because energy prices plummeted — the AAA reported gas prices fell below $4 for the first time since March. President Joe Biden celebrated the inflation news, while others pushed back that inflation is still up 8.5% from a year ago, and the price of essential products such as food continues to rise.

Former President Donald Trump says he took the Fifth Amendment during a deposition for the investigation into his business dealings. The New York attorney general is looking into allegations that his company, the Trump Organization, misled lenders and tax departments about how much his properties were worth. After the testimony, Trump released a statement saying, “I once asked, ‘If you’re innocent, why are you taking the Fifth Amendment?' Now I know the answer to that question.”

Lego turned 90 years old this week and to celebrate, the toymaker hosted the first-ever World Play Day. Mike Moynihan of the Lego Group talked to Cheddar News about the toy company’s celebrity collaborations and new products — but are there more Lego movies in the works? “There are,” he says!
Now, if they could only make stepping on a Lego a little less painful…

For those who love Disney+ the way it is, it’s going to cost you. The company announced in its latest quarterly report it would be increasing the price of Disney+ $3 to $10.99 a month. However, the House of Mouse is also introducing an ad-supported version on Dec. 8 for just $7.99 a month — the current price of the no-ads version. As household budgets decrease due to inflation and Disney productions increase in price to get more customers, Cheddar News’ Michelle Castillo says this could be a win-win for both sides.
Disney+ says you can watch whatever you like … as long as it comes with ads.

Reports of Domino's Pizza shutting down all its locations in Italy generated no shortage of jokes (and armchair business advice) about the wisdom of setting up shop in the ancestral home of red-sauced pies — but not every Italian thinks it was a foregone conclusion that the American pizza chain would fail there. Cheddar News spoke with an Italian-born New York City pizza chef to get his perspective on the closures, and why many Italians actually love American food, just maybe not its pizza.
The tweets were merciless: “Omg can u imagine anyone other than drunk American tourists ordering dominos in Italy?” 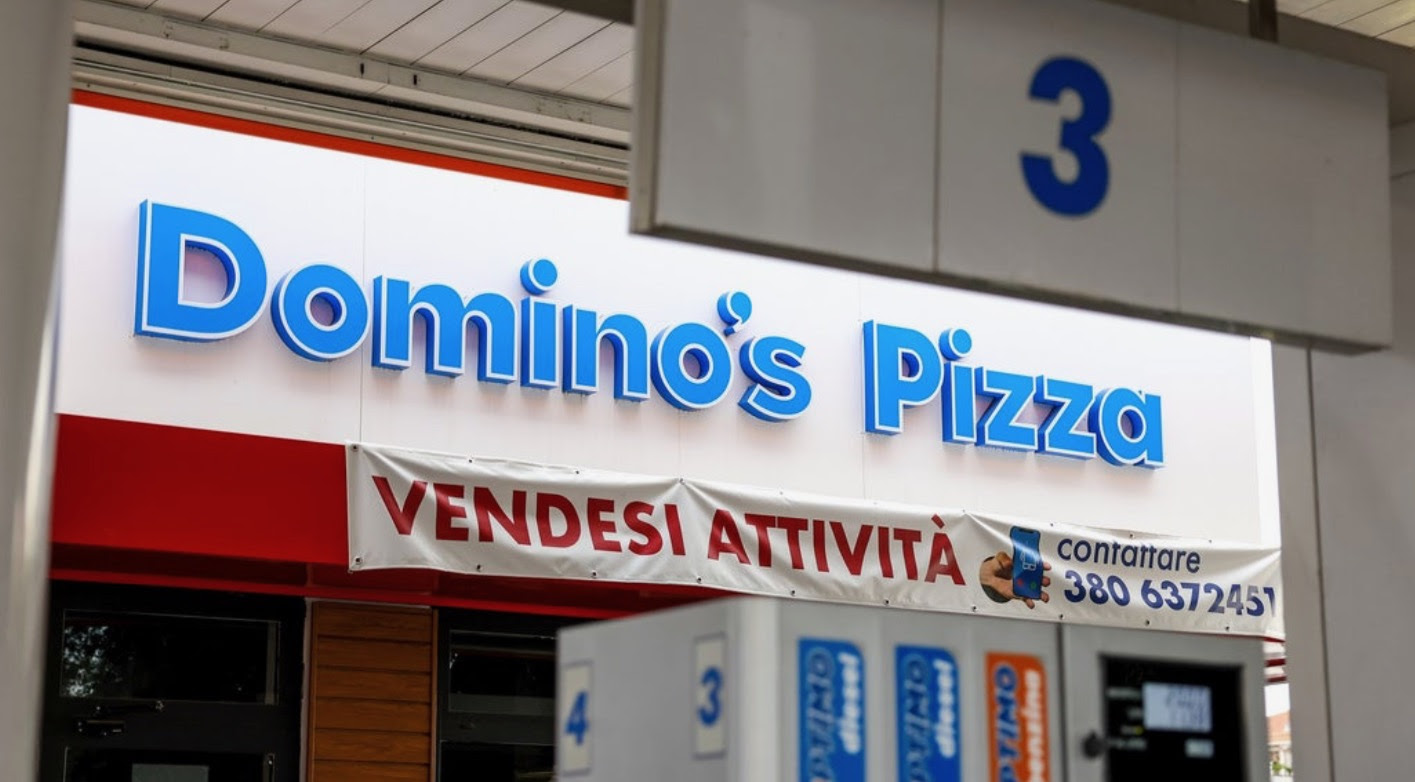 A "for sale" banner hangs outside a shuttered Domino's location in Rome. [Alessia Pierdomenico/Bloomberg via Getty Images]

Sesame Place, the amusement park based on the famously inclusionary children's show, is launching diversity training for its employees following multiple allegations of racial insensitivity. One recent viral video showed a mascot at the park passing by several Black children without engaging with them during a parade. In response to the outcry, the park's operator said it will conduct a full racial equity assessment and roll out a comprehensive anti-bias training program.

'BREAKFAST' RE-ORDER: After 12 years together, iHeartRadio's “The Breakfast Club” will have one less familiar face come fall. Host Angela Yee announced that she is leaving the show to embark on her own journey at iHeart. Prior to making the official announcement, she took to Twitter and said, "The Breakfast Club as you know it is officially over." With no immediate explanation, Twitter users flooded timelines with speculation as well as their favorite TBC moments.
EASY 'PREY' FOR HULU: Ok, so no Beyoncé update today but we still have some pretty cool entertainment stories to share with you. “Prey,” the latest installment in the “Predator” franchise, smashed records on Hulu, Idris Elba is looking to reprise his role as Bloodsport for an all-out war against Superman, and South Park nearly released a film featuring a Donald Trump deepfake.

WE NEED TO TALK ABOUT IT: GOLDEN GLOBES

The Golden Globes will be back on the air in January after NBC dropped the red-carpet awards show in 2022. One of the big issues was diversity — or lack thereof — in the Hollywood Foreign Press Association. While some strides have been made, it's not clear that the voting body is where it should be. Cheddar News' Hena Doba and Azia Celestino have some thoughts.